I have been reading a lot of reports lately on how theaters are being vandalized because people were “hurt” after watching PK. Me and wifey saw the movie on the 1st day itself and to be honest didn’t find any content which would hurt anyone. It is a very thought provoking movie. I don’t remember such commotion when Oh My God was released and it also deals with the same subject. May be it is because here we have a Muslim actor and somehow he seems to have offended a Hindu nation. Or may be the Godmen who are losing their business because of such movies are asking their followers to create such commotion. Or may be it is just that we have lost the ability to think and are just used to watching movies like Happy New Year and Kick (mindless rubbish) and cant act right when a movie challenges our beliefs. 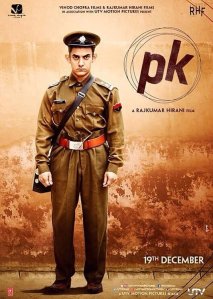 The WordPress.com stats helper monkeys prepared a 2014 annual report for this blog.

The concert hall at the Sydney Opera House holds 2,700 people. This blog was viewed about 14,000 times in 2014. If it were a concert at Sydney Opera House, it would take about 5 sold-out performances for that many people to see it.